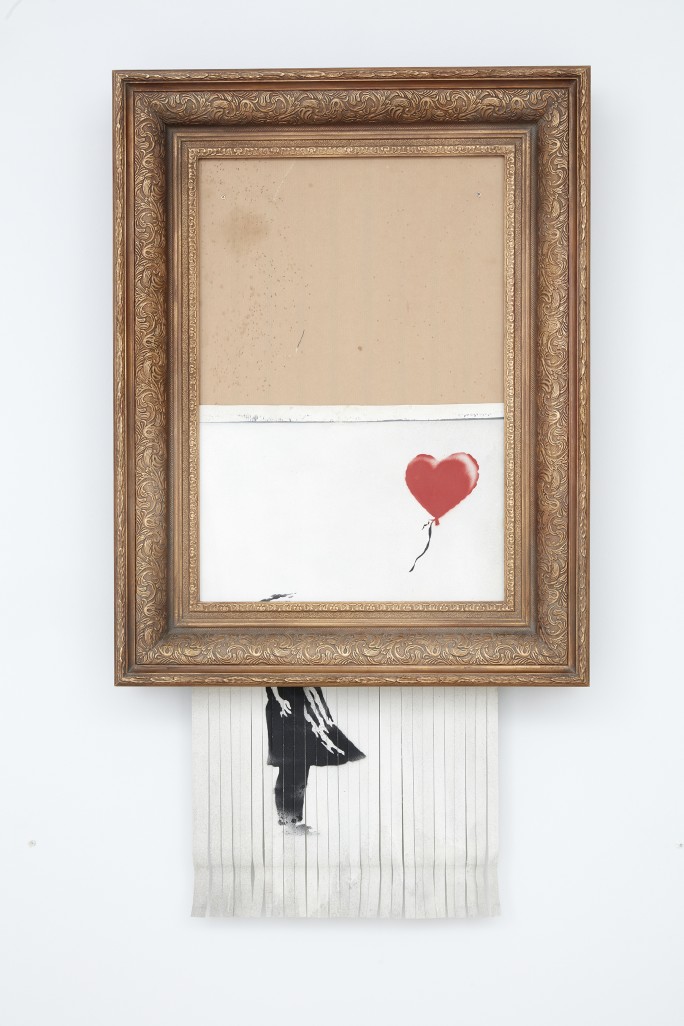 The art world is fascinating whatever way you look at it. Maybe it’s because of its alienness to me, but everything related to this world tends to astonish me. As a matter of fact, what happened last week at Sotheby’s strengthens my view of art as complex in essence and presence.

When I heard about Banksy’s “deliberate destruction” of his own work, before the perplexed eyes first of those attending the auction and later of the whole world, I was shocked and appalled at what I considered the irreparable loss of something unique, original and irreplaceable. However, after watching the video a few times, I think anyone wanting to really “destroy” their work of art would have torn it to shreds or burnt it, making sure nothing at all remained. They would not have left the job “half-finished”.

That’s why my initial astonishment at what seemed irretrievable has evolved into reflection on the value of this item; not so much on its artistic value as an ever-changing work –it does still exist, after all– but on its economic value, which has inevitably changed in a couple of seconds too.

I am surprised at the velocity with which the video has gone viral and, most of all, at the widespread opinion that the author had planned this public “sacrifice” of his work to protest against the art market and the astronomical amounts of money spent in art by rich people, when the fact is that anyone who knew a tiny bit about the art market could have foreseen that the effect would be quite the opposite to the one supposedly intended by the author.

Premeditated or not, whether Banksy has done this alone or with Sotheby’s, the past, present or future owners’ knowledge, no one can deny that his act has created a dramatic effect. Experts affirm that it has doubled the value of this work of art, which has been quickly renamed “Love is in the bin” and already visited by thousands of people at Sotheby’s New Bond Street gallery in London.

As its new, proud owner has declared, she has “ended up with her own piece of art history”, and that’s always a solid asset.

Fascinating, isn’t it? Do I hear more?

Must! Blog
We use technology such as cookies on our site to personalise content and ads, provide social media features, and analyse our traffic. Click below to consent to the use of this technology across the web. You can change your mind and change your consent choices at anytime by returning to this site.
Accept Read More
Privacy & Cookies Policy

This website uses cookies to improve your experience while you navigate through the website. Out of these, the cookies that are categorized as necessary are stored on your browser as they are essential for the working of basic functionalities of the website. We also use third-party cookies that help us analyze and understand how you use this website. These cookies will be stored in your browser only with your consent. You also have the option to opt-out of these cookies. But opting out of some of these cookies may affect your browsing experience.
Necesarias Siempre activado

Any cookies that may not be particularly necessary for the website to function and is used specifically to collect user personal data via analytics, ads, other embedded contents are termed as non-necessary cookies. It is mandatory to procure user consent prior to running these cookies on your website.